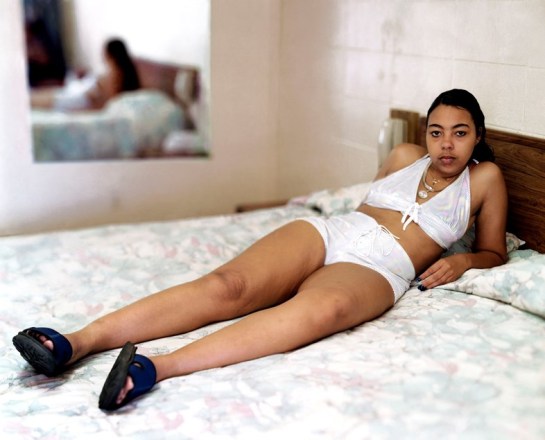 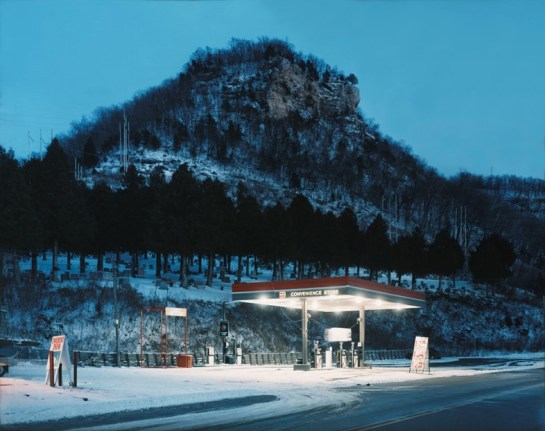 “Generally I come up with some idea and I go out and start chasing after it and the idea morphs over time, like Sleeping by the Mississippi – when that one started it had nothing to do with the Mississippi river and had a totally different title. The most recent project Songbook started at The LBM Dispatch, which is a self-published newspaper that I worked on with Brad Zellar, a photo writer, so it’s really about coming up with an idea but allowing it to evolve.

I plan as much as I can ahead but then the reality of the world changes everything and it’s this constant act of planning and then re-modulating based on what I find.” 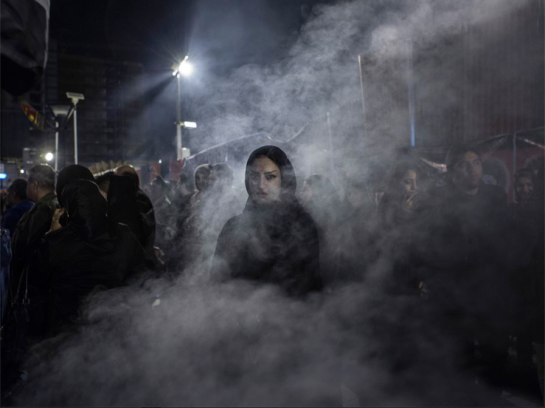 An Iranian woman walks through a haze of smoke caused by the burning of the herb esfand. According to popular belief, this ritual drives away the evil eye.

“Walker Evans famously photographed New York’s underground commuters between 1938 and 1941 using a cleverly constructed camera that concealed his photographic intent. Luc Delahaye set about something similar on the Paris Metro in the 1990s, again with a hidden camera. In the fictional world, a character in Michael Haneke’s film Code Unknown (2000) also rides the underground trains of Paris with a camera. What these three approaches have in common was the photographer’s desire to work incognito, using a hidden camera. In contrast, British photographer Bob Mazzer bared it all. Traveling by Tube to and from work (at a porn theater, perhaps not incidentally), Mazzer began taking photographs of his fellow passengers and found he could not stop.

London is a world city that mixes people from all corners of the globe. Every day, around four million of the city’s residents use the Tube. So it is understandable that someone would be compelled to try and capture some small fraction of the human diversity and strangeness to be found in its subterranean depths. Mazzer’s approach, accordingly, is democratic: if an individual or a small group catches his eye, his camera clicks and if the subject responds to his presence by posing, then all well and good. Similarly, Mazzer’s photographs capture the very democratic nature of the environment itself. For example, many of his pictures show the amusing serendipity of people utterly unlike one another sitting unnaturally close in a confined space. As German photographer Wolfgang Tillmans once wrote about the subway: ‘men and women incredibly close to each other’ yet, ‘we’ve all decided not to think of it as a sensual experience.’

Indeed, Mazzer’s most engaging images go beyond the surface and capture moments that are peculiar to underground train travel. Owing to the (uncomfortable) proximity, many people withdraw into themselves for the duration of their journey. The train ride becomes a time of repose, a period where nothing happens and Mazzer’s sharp eye catches passengers with their defenses down, ready to reveal the vulnerabilities that make us human.

Besides the serious, Mazzer’s camera-ready aptitude also brings us moments of mirth and sociability: friends on a night out, a guitar player in a commanding position atop an escalator, a man on a ladder with his head effaced by the face of a clock he is fixing. A few are even nakedly opportunistic: drunks and vagabonds in various poses, two men fighting one another in their seats, the police arresting someone. But in sum, Mazzer’s pictures give us a lovely, daily document of the ups and downs of life—and all those little, introspective bits in between.” 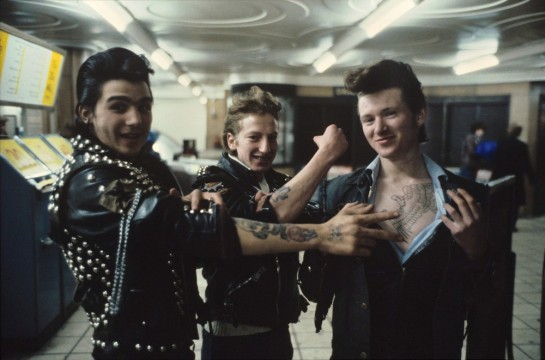 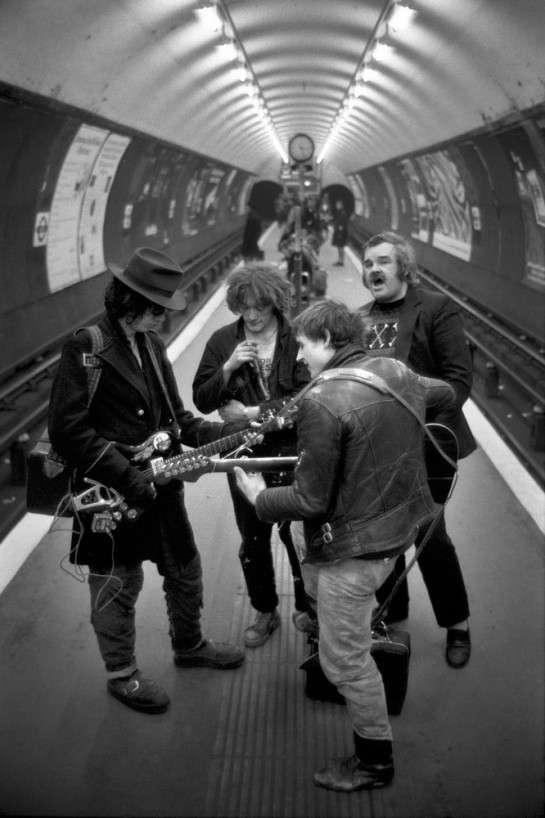 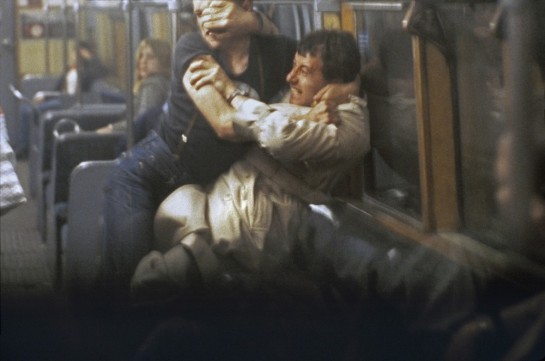 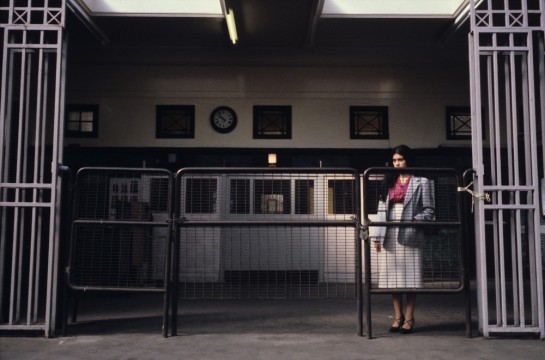 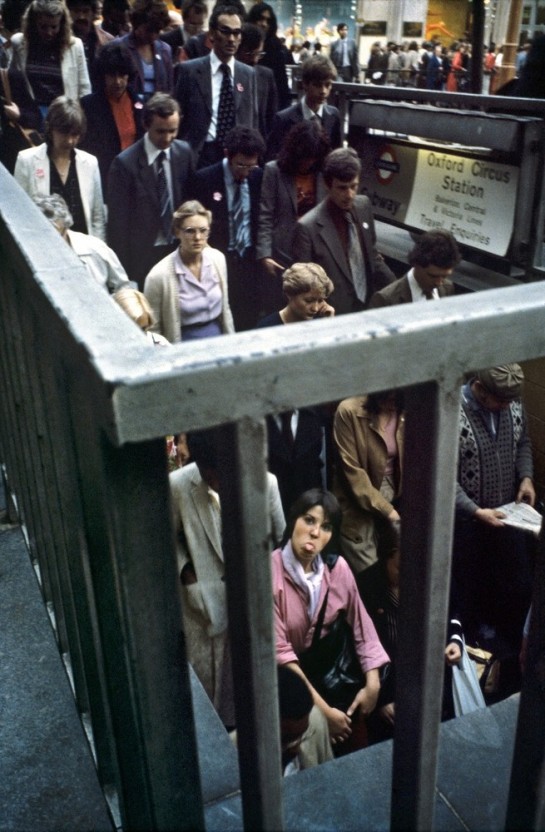 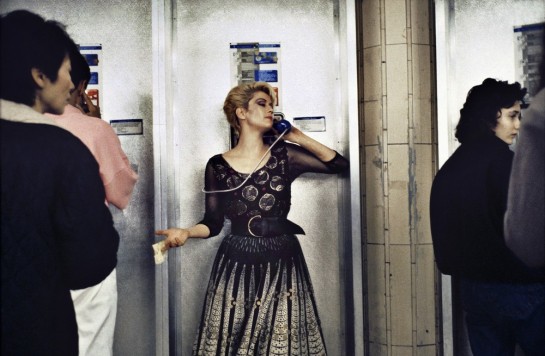 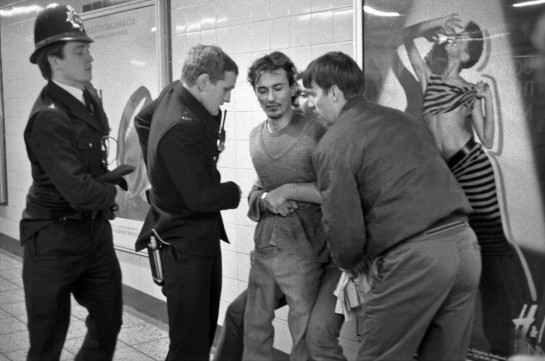 “Every day I travelled to King’s Cross and back. Coming home late at night, it was like a party and I felt like the tube was mine and

I was there to take the pictures.” 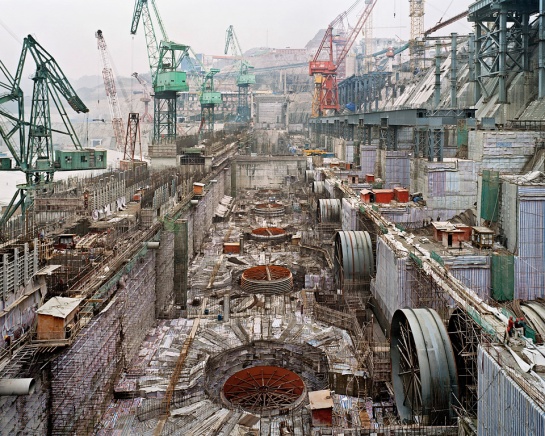 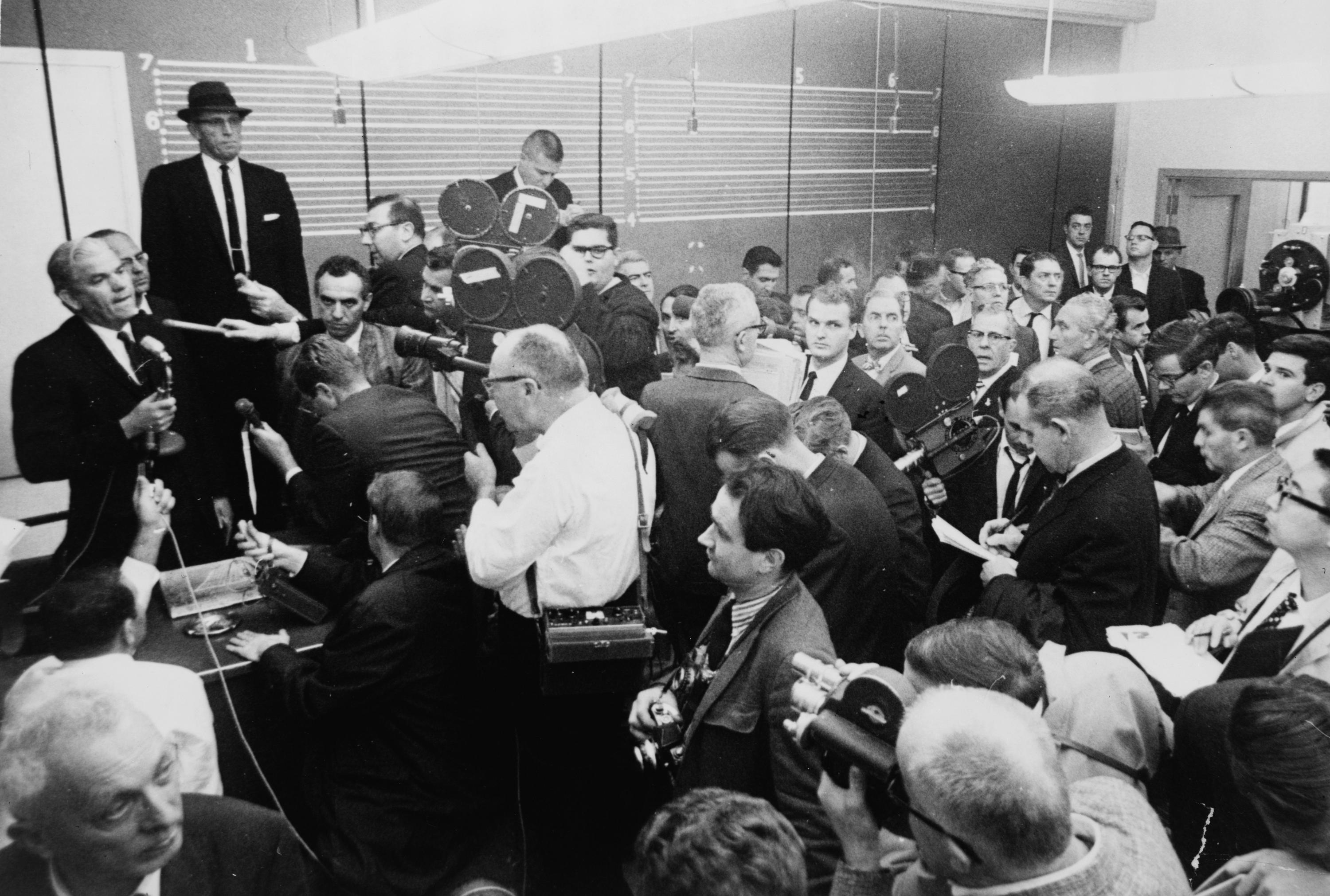 “I am not a journalist. I am a conceptual documentary artist that is using my visual expression for building narratives that are unseen and unheard. I am pushing for cultural and social change through a different story that runs parallel to a lot of the media coverage discussing Braddock…that avoids crucial issues.

“It is the fact that we still haven’t dealt with this as a society or culture. A slow violence is occurring all the time. The media and journalists tend to go toward headlines, but this is something that has been slowly troubling for a long time. This is about how industry impacted quality of life, and led to conditions of economic inequality… I am staying inspired because I am watching history repeat itself with the rise of the creative class—people not interested or invested in the residents that have taken the last 30 year hit.”

“If we fail to change, history will repeat itself.” 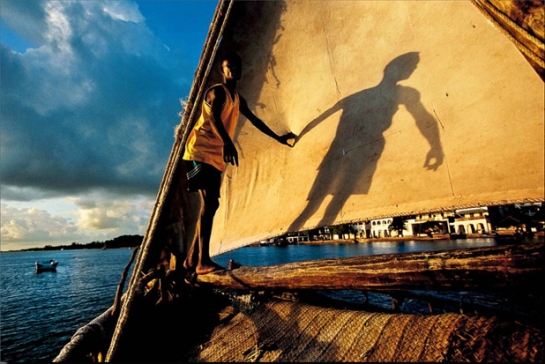 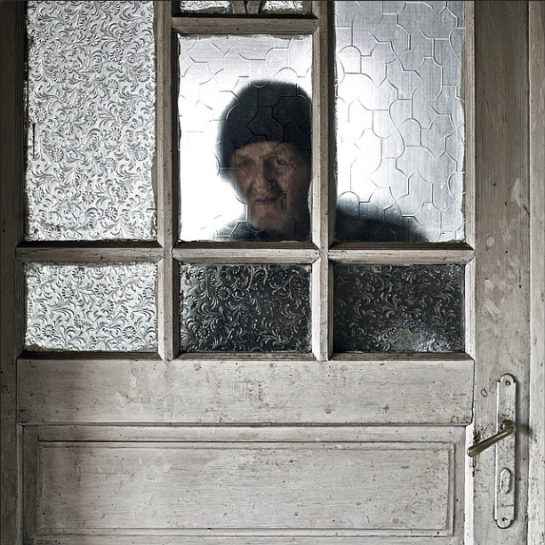 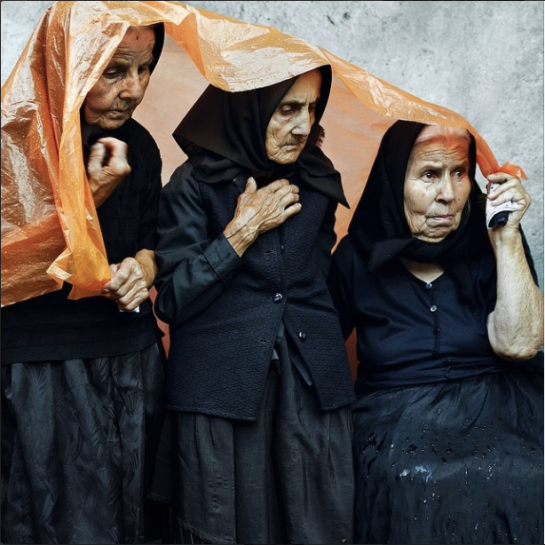 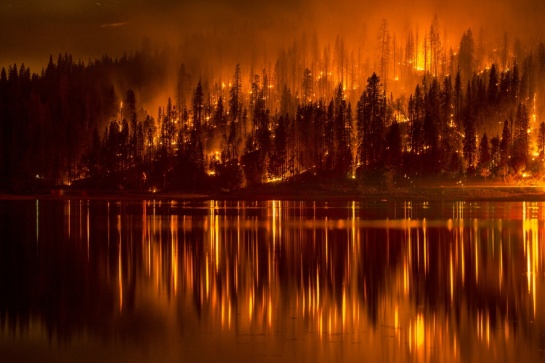 “My son and I spotted smoke, and given California’s extreme drought I knew it was not good. We jumped in the car but had only gone a mile when burning ash rained down like falling snow. The rangers and police were ordering a mandatory evacuation and we had to go home to prepare. Then we returned to the Falls area of Bass Lake and I resumed shooting. The picture combines a beautiful forest reflected in the calm waters, and then slams home the fact that it is being consumed by the fire. It conveys the sense of awe, horror and feeling of loss I felt while standing there watching the forest burn.”