“I never have taken a picture I’ve intended. They’re always better or worse.”

“I work from awkwardness. By that I mean I don’t like to arrange things. If I stand in front of something, instead of arranging it, I arrange myself.”

“Most of Arbus’s work lies within the Warhol aesthetic, that is, defines itself in relation to the twin poles of boringness and freakishness; but it doesn’t have the Warhol style. Arbus had neither Warhol’s narcissism and genius for publicity nor the self-protective blandness with which he insulates himself from the freaky nor his sentimentality. It is unlikey that Warhol, who comes from a working-class family, ever felt any ambivalence toward success which afflicted the children of the Jewish upper middle classes in the 1960s. To someone raised as a Catholic, like Warhol (and virtually everyone in his gang), a fascination with evil comes much more genuinely than it does to someone from a Jewish background. Compared with Warhol, Arbus seems strikingly vulnerable, innocent–and certainly more pessimistic. Her Dantesque vision of the city (and the suburbs) has no reserves of irony. Although much of Arbus’s material is the same as that depicted in, say, Warhol’s Chelsea Girls (1966)…For Arbus, both freaks and Middle America were equally exotic: a boy marching in a pro-war parade and a Levittown housewife were as alien as a dwarf or a transvestite; lower-middle-class suburbia was as remote as Times Square, lunatic asylums, and gay bars. Arbus’s work expressed her turn against what was public (as she experienced it), conventional, safe, reassuring–and boring–in favor of what was private, hidden, ugly, dangerous, and fascinating. These contrasts, now, seem almost quaint. What is safe no long monopolizes public imagery. The freakish is no longer a private zone, difficult of access. People who are bizarre, in sexual disgrace, emotionally vacant are seen daily on the newsstands, on TV, in the subways. Hobbesian man roams the streets, quite visible, with glitter in his hair.” 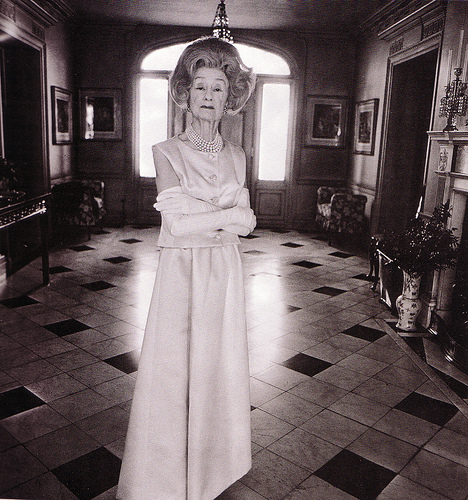 “Everybody has that thing where they need to look one way but they come out looking another way and that’s what people observe. You see someone on the street and essentially what you notice about them is the flaw. It’s just extraordinary that we should have been given these pecularities. And, not content with what we were given, we create a whole other set. Our whole guise is like giving a sign to the world to think of us in a certain way but there’s a point between what you want people to know about you and what you can’t help people knowing about you.”

“I really believe there are things nobody would see if I didn’t photograph them.”